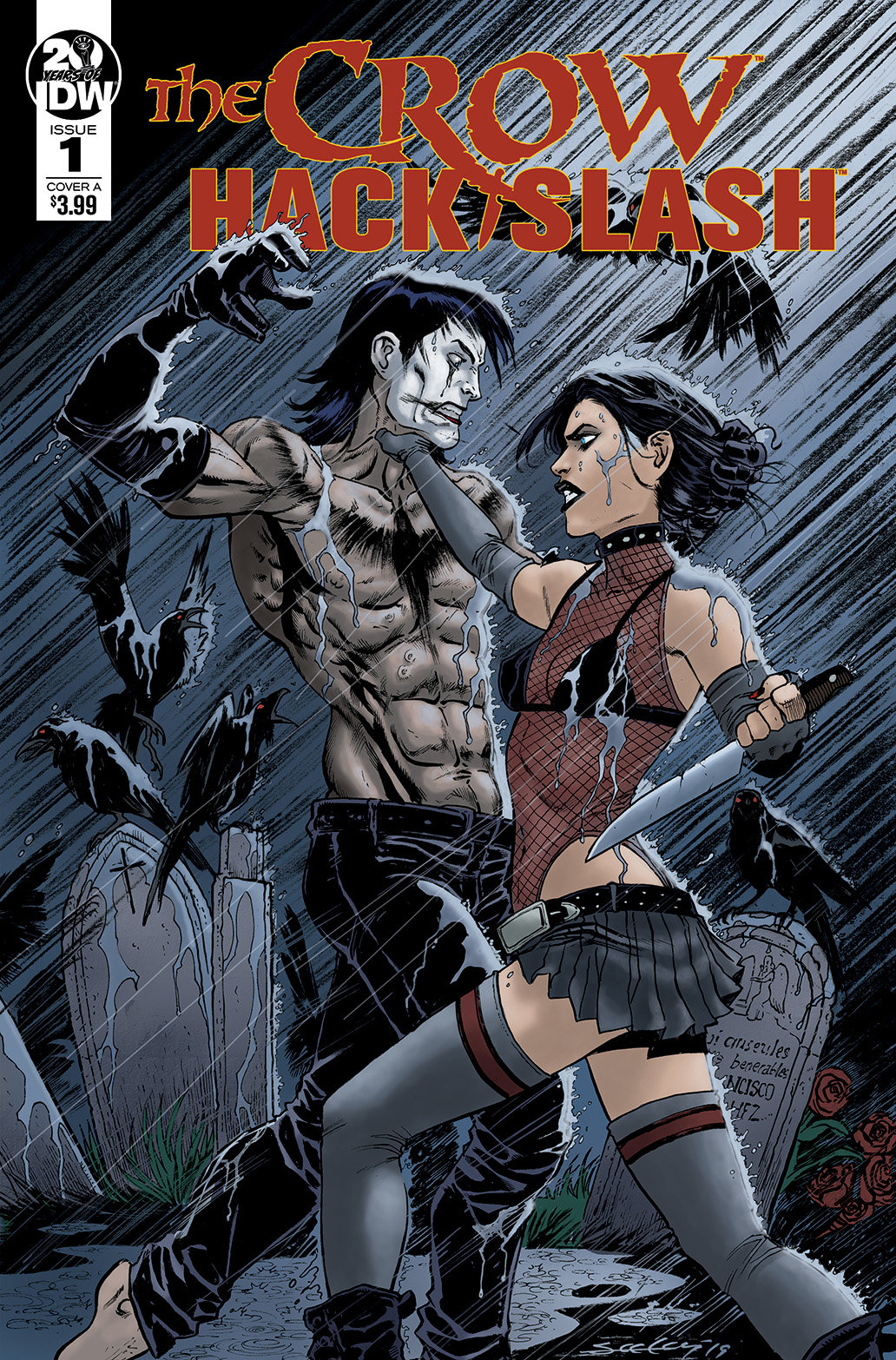 Hack/Slash creator Tim Seeley brings his singular vision of horror – and his unique version of the “Final Girl” – to IDW in The Crow: Hack/Slash, a comic book crossover debuting in June. Illustrated by Tim Seeley with inks by returning Crow artist Jim Terry, this four-issue miniseries sees fan-favorite femme fatale Cassie Hack on the trailer of an all-new Crow… one unlike any that fans have seen before!

In The Crow: Hack/Slash #1, a soul is brought back… but something is terribly wrong! The resurrected Angeles Cero won’t stop killing on a quest for revenge, and the bodies are piling up. Now, slasher hunter Cassie Hack and her monstrous partner Vlad are on the trail of the Crow Killer, wrongly believing themselves in pursuit of a masked murderer they’ve hunted for years.

“The Crow defined me as a fan of the comics medium, but also introduced me to a whole world of music and fashion that I’d never had access to before – one that completely fit the attitude my teenage brain was desperately looking for,” says Tim Seeley. “It introduced me to the idea that comics could tell dark and personal stories full of pain and beauty. No doubt about it – without O’Barr’s original The Crow, there would never have been a Hack/Slash. Mixing Cassie, Vlad, and The Crow has been in the making for 25 years, and my buddy Jim Terry and I cannot wait to unleash it on the world.”

Jim Terry says, “O’Barr’s The Crow was a turning point for me – his book brought me to indie comics and blew the doors off what I thought a comic could be. Years later, I’d become friends with James and eventually work on The Crow: Skinning the Wolves. It was my first published work and still among the best things I’ve done, and now I get to work in this universe again with my pal Tim Seeley. He’s a clever writer and a gifted storyteller, so I’m excited to take this ride and push some artistic limits!”

Issue #1 will feature a regular cover by Tim Seeley, with a variant edition by Rebekah A. Isaacs (Buffy the Vampire Slayer) and a special “inked” variant by Seeley.

For information on how to secure copies of The Crow:Hack/Slash #1 (APR190642), please contact your local comic shop or visit www.comicshoplocator.com to find a store near you.

IDW Publishing will proudly debut the first chapter of Ghost Tree, a four-issue miniseries that takes readers on a journey from the dark forests of Japan to the ethereal realm beyond….

When an eight-year-old girl literally begins to transform into a tree, her single mom, troubled brother, and possibly insane grandfather embark on a bizarre odyssey across the back roads of America…