Just announced at MCM Comic Con London, Conan will be starring in a new series that will take the barbarian to places he’s never gone before! Conan made his grand return to the Marvel Comics earlier this year and now, CONAN: BATTLE FOR THE SERPENT CROWN will have the legendary Robert E. Howard character diving deeper into the Marvel Universe meeting a wide variety of Marvel heroes and daring to go up against Marvel’s most iconic villains, including the devilish Mephisto! A far cry from the Hyborian Age, Conan will take his relentless strength and savage sword to Las Vegas on an epic quest to find the Serpent Crown of Atlantis. Guiding him on his journey to Sin City and beyond will be writer Saladin Ahmed (BLACK BOLT, MILES MORALES: SPIDER-MAN) and artist Luke Ross (STAR WARS: ALLEGIANCE, SAVAGE SWORD OF CONAN).

“Getting to write Conan the Barbarian taking on the Marvel Universe is a high-octane, widescreen dream gig for me,” says Ahmed. “The 616 is a world full of unimaginably powerful treasures and absurdly wealthy kings — the perfect place for Conan to ply his trade as a warrior-thief. From Las Vegas to Atlantis, Conan will carve a path of plunder — and face some of the mightiest heroes and villains in the Marvel universe!”

“Since being transported into the Marvel Universe in AVENGERS: NO ROAD HOME and SAVAGE AVENGERS, Conan’s been drawn into his own adventures as he explores this strange new world, and now we’re going to get a look at one particular quest,” says Editor Mark Basso. “Far from home, but far from helpless, this is Conan as you’ve never quite seen him before.”

Conan’s foray into the Marvel Universe continues this February in CONAN: BATTLE FOR THE SERPENT CROWN! 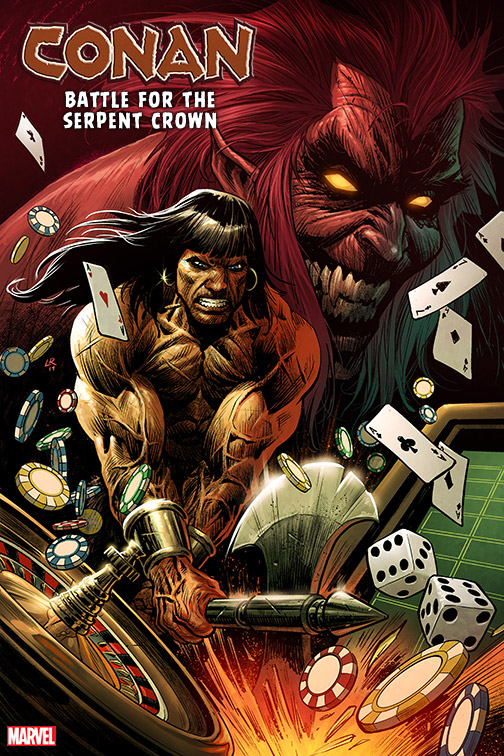 CONAN: BATTLE FOR THE SERPENT CROWN #1 (OF 5)
Written by SALADIN AHMED
Penciled by LUKE ROSS
Cover by GURU-eFX

A DEADLY QUEST AND A DARING HEIST…IN THE AGE OF MARVELS!

CONAN wanders the desert, and as he reaches the city, no Stygian temple nor Vendyhan fortress greets him.  No, something far stranger: the lights of Fabulous Las Vegas!  Conan is far from home, and it’s time for him to tread the thrones of the Marvel Universe under his sandaled feet!

The City of Sin is just the beginning for Conan’s solo jaunt by Saladin Ahmed (BLACK BOLT, MILES MORALES: SPIDER-MAN) and Luke Ross (STAR WARS: ALLEGIANCE, SAVAGE SWORD OF CONAN), as the barbarian finds himself on a quest for a relic that predates even his Hyborian Age: the Serpent Crown of Atlantis!  But will his battle for this crown earn Conan his own kingdom, or doom him to a nefarious trap set forth by MEPHISTO?  Featuring a wide array of Marvel heroes and villains, this is an adventure you can’t afford to miss!

In the aftermath of Ragnarok, Oona, an elven ranger, sets out into the post-apocalyptic chaos to discover the fate of the old gods. But first, she must fulfill an oath to…