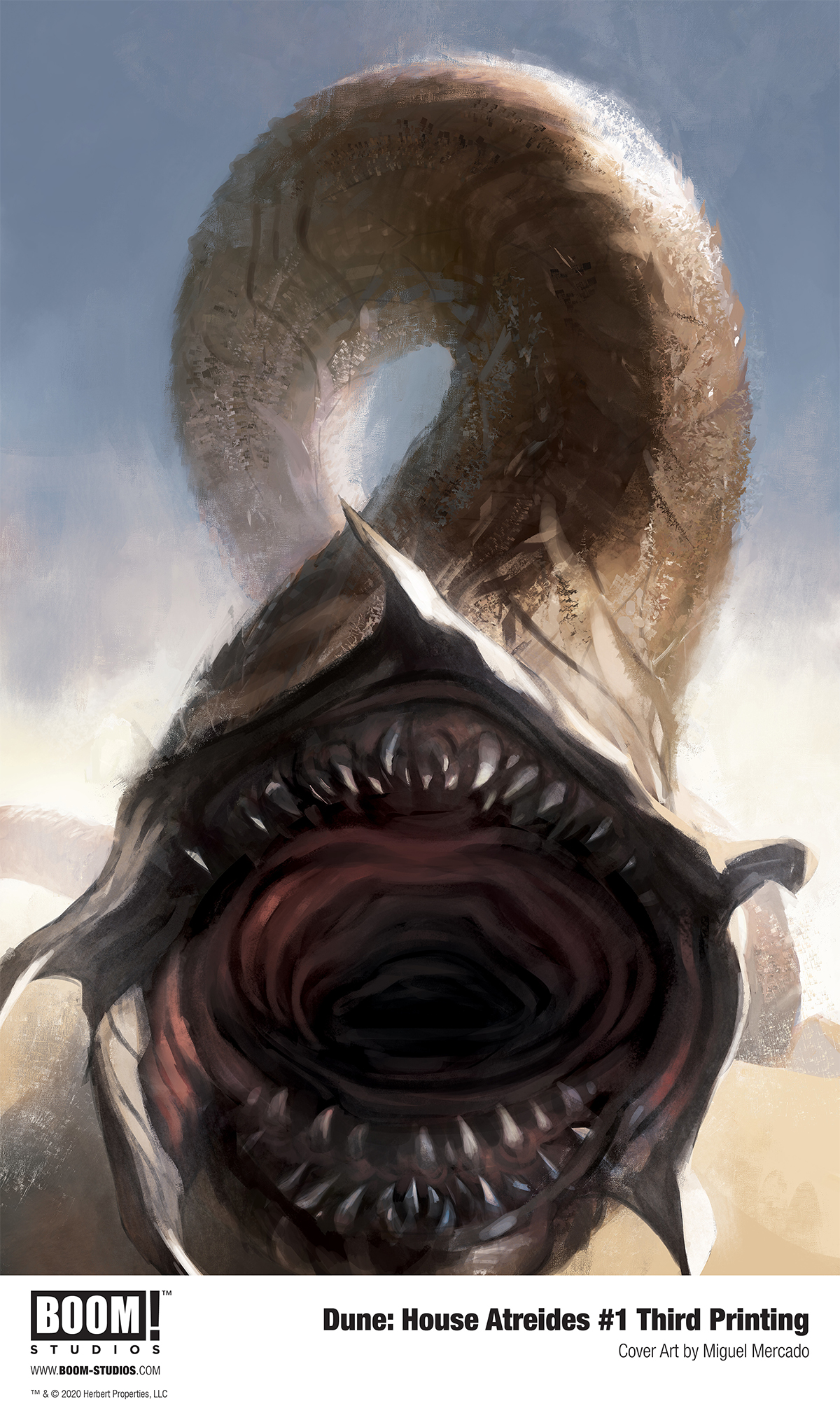 BOOM! Studios today announced that Dune: House Atreides #1, the series premiere of the twelve-issue Dune: House Atreides comic book adaptation of the New York Times bestselling novel, adapted & scripted by Brian Herbert and Kevin J. Anderson, who co-wrote the eponymous prequel novel based on Frank Herbert’s notes and illustrated by artist Dev Pramanik (Paradiso) and colorist Alex Guimarães, has sold out of the second printing at the distributor level!

Set in the years leading up the Hugo and Nebula Award-winning Dune—which inspired the upcoming feature film from Legendary Pictures— Dune: House Atreides transports readers to the far future on the desert planet Arrakis where Pardot Kynes seeks its ecological secrets in remote, desolate regions of the alien world.

Meanwhile, a violent coup is planned by Shaddam Corrino, the son of Emperor Elrood; far away, an eight-year-old slave Duncan Idaho seeks to escape his cruel masters; and a young man named Leto Atreides begins a fateful journey. These unlikely souls are drawn together first as renegades and then as something more, as they discover their true fate – to change the very shape of history!

“Sci fi and comic book fans can’t get enough of Dune, so we’re very excited to announce a third printing of Dune: House Atreides #1, creating a fresh opportunity for fans everywhere to discover key characters in the earlier days of the Dune universe and setting the stage for the explosive events of Dune,” said Filip Sablik, President, Publishing & Marketing.

Created by visionary writer Frank Herbert, Dune debuted in 1965, has sold millions of copies and is arguably the most admired science fiction novel of all time. After winning the Hugo Award and inaugural Nebula Award, Dune inspired a best-selling novel series and led to multiple live-action adaptations, including the upcoming feature film from Legendary Pictures. The influence of Dune extends well beyond the world of entertainment, with an incalculable influence on modern scientific thinking about politics, religion, outer space, environmentalism and more.

The Dune: House Atreides limited series is published in coordination with Abrams ComicArts, who will release a graphic novel trilogy adapting Frank Herbert’s original novel Dune, with volume one coming November 24, 2020. The Dune graphic novels from ComicArts are also adapted and scripted by Brian Herbert and Kevin J. Anderson, and will be illustrated by Raúl Allén and Patricia Martín, and feature covers by Bill Sienkiewicz.

With the unprecedented shutdown of some of our daily social activities, local small businesses are being hit the hardest, including our comic book retailers. If you’re looking for ways to help,…

Fans of Princess Diana of Themyscira have the opportunity to bid on not one but two of her biggest comic keys. …

Experience the zany world of Super Mario Bros. through manga! The popular Mario manga is coming stateside in late 2020….