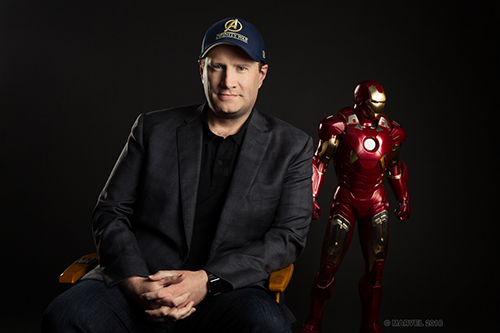 According to an October 15 exclusive in Deadline, Marvel Studios President Kevin Feige has been named Chief Creative Officer across all of Marvel’s storytelling and content creation platforms. This includes but is not limited to comics publishing.

In addition to Feige’s current Marvel Studios duties, according to Deadline, “all the company’s key creative executives across film and TV will now report to him, sources said. Already master of the Marvel Cinematic Universe, Feige’s oversight will extend to the overall creative direction of Marvel’s storytelling and content creation platforms. As part of this, Marvel TV and animation generator Marvel Family Entertainment will move under Feige’s Marvel Studios banner.” He will continue reporting to Walt Disney Studios Co-Chairman and Chief Creative Officer Alan Horn and Co-Chairman Alan Bergman.

Explore the futuristic streets of Italy in RV9, a fast-paced spy thriller from writer Ben Goldsmith (The Seance Room) and artist Travis Mercer. Check inside for a look at this new…

Here are all the reasons why you should check out the Saga comic series
The post 5 Reasons To Start Reading SAGA Right Now appeared first on Nerdist. …