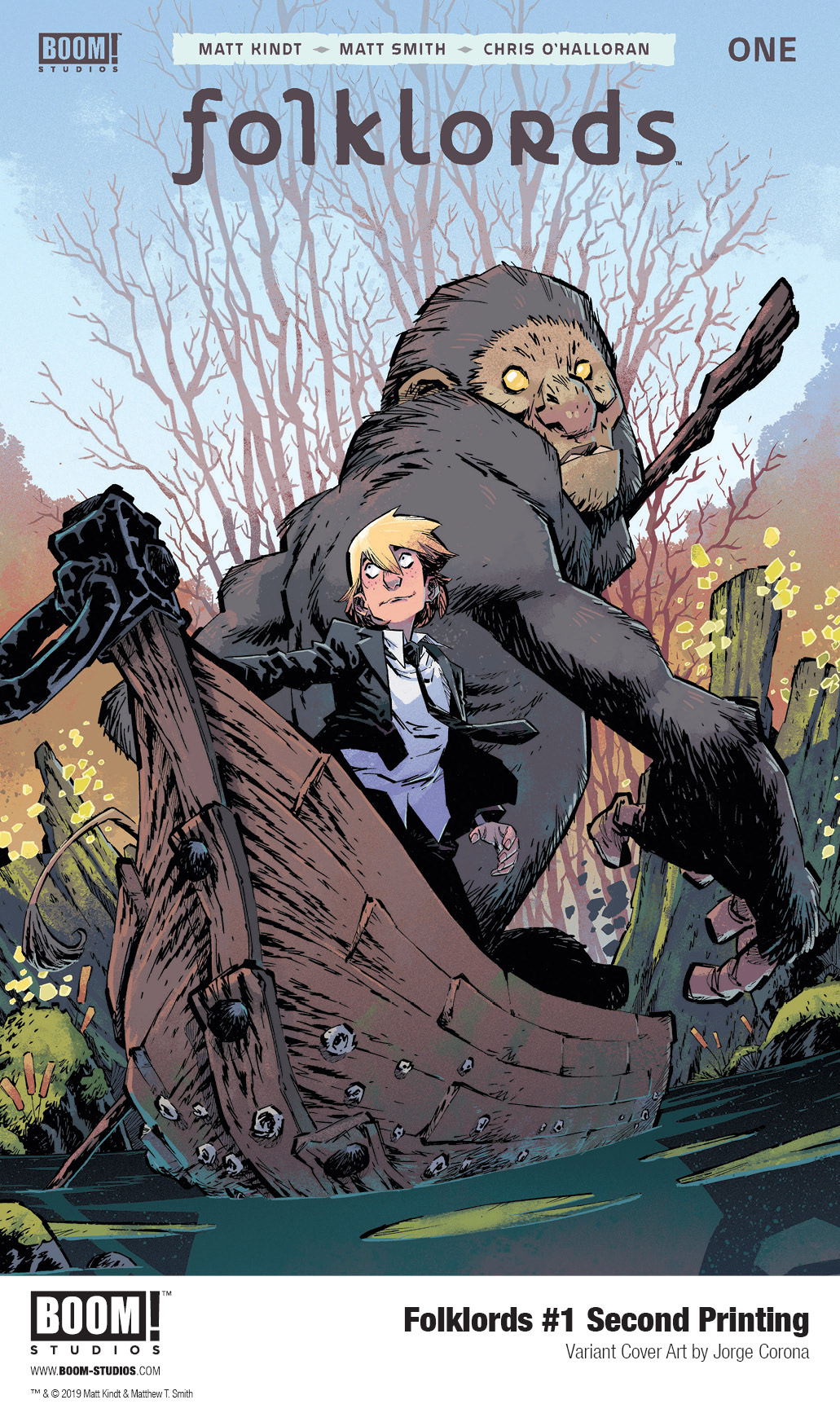 BOOM! Studios announced today that Folklords #1, the premiere issue of a new original series from Eisner Award-nominated writer Matt Kindt (Grass Kings, Black Badge) and acclaimed artist Matt Smith (Hellboy & the BPRD: Long Night at Goloski, Lake of Fire), has sold out at the distributor level before its on-sale date of November 13, 2019.

In order to meet the overwhelming demand from retailers and fans, BOOM! Studios has fast-tracked Folklords #1 Second Printing Variant (SEP198458) to arrive in comic shops on November 27, 2019. This second printing will feature an all-new cover by artist Jorge Corona (Middlewest). Quantities will be limited and allocations may occur.

In a world of magic and monsters, Ansel is an outsider haunted by visions of well-pressed suits and modern technology. When it comes time for him to declare his Quest on his 18th birthday, Ansel decides to seek out a legend that is only spoken in hushed whispers—the Folklords—hoping they can explain his visions…but looking for the Folklords is expressly forbidden, and going on a rogue quest is punishable by death. What will Ansel risk to find answers to the questions and visions that have set him apart his entire life?

“The overwhelming early support Folklords has received from retailers has been an absolute joy to experience,” said Eric Harburn, Senior Editor. “Matts Kindt & Smith, along with Chris and Jim, have built a world and story that we believe will truly resonate with readers, and with this expedited second printing, featuring a beautiful new cover by Jorge Corona, everyone will get a chance to join in on Ansel’s epic adventure from the very beginning.”

Folklords is the newest release from BOOM! Studios’ eponymous imprint, home to critically acclaimed original series, including Once & Future by Kieron Gillen and Dan Mora; Faithless by Brian Azzarello and Maria Llovet; Abbott by Saladin Ahmed and Sami Kivelä; Bury The Lede by Gaby Dunn and Claire Roe; Klaus by Grant Morrison and Dan Mora; Something is Killing The Children by James Tynion IV and Werther Dell’Edera, as well as the upcoming The Red Mother by Jeremy Haun and Danny Luckert. The imprint also publishes popular licensed properties including Joss Whedon’s Firefly from Greg Pak and Dan McDaid; Buffy The Vampire Slayer from Jordie Bellaire and David Lopez; and Mighty Morphin Power Rangers from Ryan Parrott and Daniele Di Nicuolo.

Print copies of Folklords #1 First Printing (SEP191261) will be available for sale November 13, 2019 exclusively at your local comic shop. Check out the PREVIEWS Prevue below to get am early look at this new series!

Fresh off their hit run on Powers of X, mastermind writer Jonathan Hickman and superstar artist R.B. Silva reunite in X-Men #5 for a shocking story that will lead directly into…

Necessary Evil continues! As Jason forms his new team; The Omega Rangers, he struggles to keep the truth from Trini and Zack. And on another planet, Tommy has reached the tower…