The Small Press Expo (SPX) announced its nominees for the 2020 Ignatz Awards, and IDW Publishing and imprint Top Shelf Productions have been honored with three combined titles on the ballot!

The Ignatz Awards, named for the mouse from George Herriman’s Krazy Kat comic strip, recognizes exceptional work that challenges popular notions of what comics can achieve, both as an art form and as a means of personal expression. Nominees are determined by a panel of comics professionals. 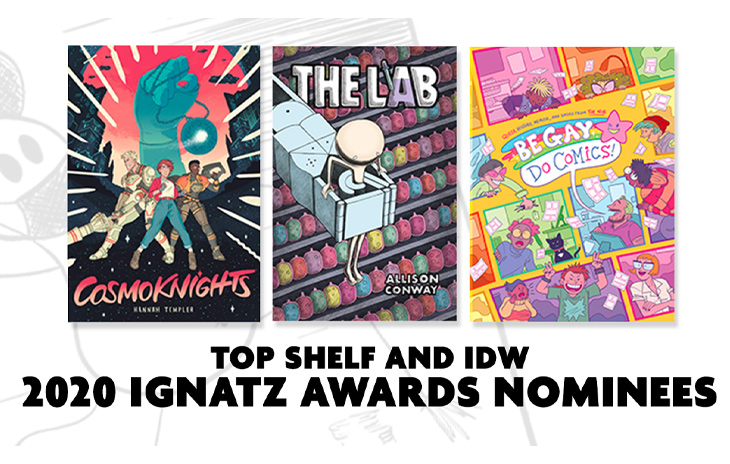 Cosmoknights by Hannah Templer is nominated in the “Outstanding Comic” category. Cosmoknights follows a ragtag band of space gays, for which liberation means beating the patriarchy at its own game. On the run and off the galactic grid, Pan and a charismatic pair of off-world gladiators discover the astonishing secrets of a neo-medieval world… and the intoxicating possibility of burning it all down.

The Lab by Allison Conway is nominated in the “Outstanding Story” category. This wordless graphic novel follows a nameless subject trapped in a nightmarish test facility. Painstakingly and evocatively rendered, Allison Conway’s debut graphic novel explores the spectrum between lifeless gray and vivid color. It asks uncomfortable questions about the treatment we tolerate and the injustices underlying our modern world.

Be Gay, Do Comics, edited by The Nib, is nominated in the “Outstanding Anthology” category. Brimming with resilience, inspiration, and humor, Be Gay, Do Comics takes readers from the American Revolution through Stonewall to today’s fights for equality and representation in tales written and illustrated by an incredible lineup of top indie cartoonists.

“Hannah Templer and Allison Conway are both outstanding talents who use the power of comics and science fiction to explore resonant human truths,” says Top Shelf editor and marketing director Leigh Walton. “And from the irresistibly slick charm of Cosmoknights to the grim dreamscapes of The Lab, they’ve both poured their hearts into making images that will stick with readers for a lifetime. What an honor to see the indie comics community rally around these books, and to know that the best is yet to come!”

“On behalf of the entire team that brought Be Gay, Do Comics to life, I’d like to thank everyone who has recognized the importance of sharing stories that reflect the variety of human experience,” says Justin Eisinger, Editorial Director, Graphic Novels & Collections for IDW Publishing. “Going further, it’s so great that an anthology like this, inclusive of so many viewpoints and self-confrontational revelations, is being celebrated for its contribution to cultural discourse. Congratulations toThe Nib and all the creators.”

Congratulations to all the great nominees! Voting is open to the public and runs from now through September 8, at www.smallpressexpo.com/spx-2020-ignatz-nominees.

To acquire copies of IDW Publishing’s nominated graphic novel releases, please contact your local comic shop or visit www.comicshoplocator.com to find a store near you. 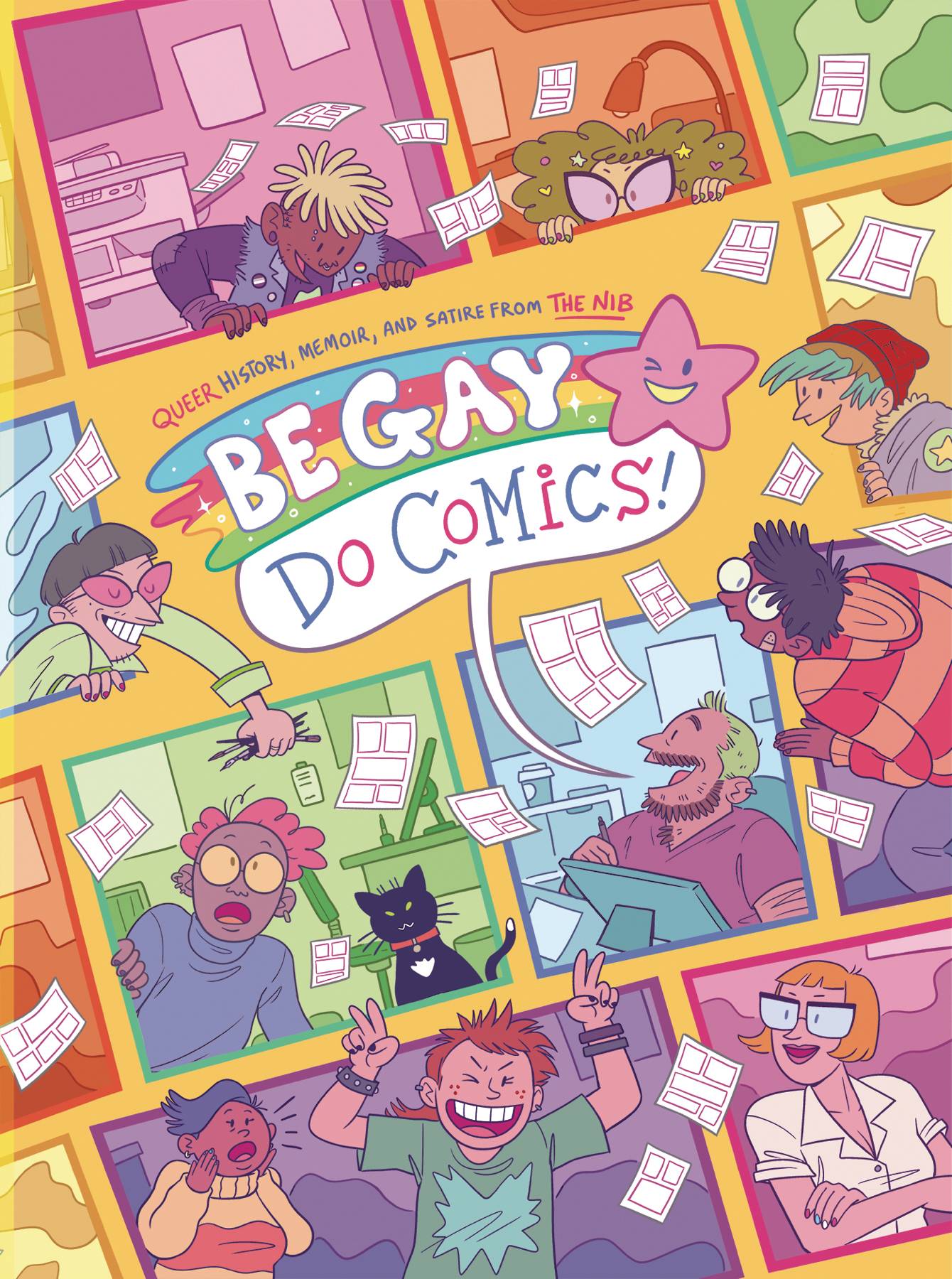 The dream of a queer separatist town. The life of a gay Jewish Nazi-fighter. A gender reveal party that tears apart reality. These are the just some of the comics you’ll find in this massive queer comics anthology from The Nib. Be Gay, Do Comics is filled with dozens of comics about LGBTQIA experiences, ranging from personal stories to queer history to cutting satire about pronoun panic and brands desperate to co-opt pride. Brimming with resilience, inspiration, and humor, an incredible lineup of top indie cartoonists takes you from the American Revolution through Stonewall to today’s fights for equality and representation. Featuring more than 30 cartoonists including Hazel Newlevant, Joey Alison Sayers, Maia Kobabe, Matt Lubchansky, Breena Nuñez, Sasha Velour, Shing Yin Khor, Levi Hastings, Mady G, Bianca Xunise, Kazimir Lee, and many, many more! Advance solicited for September release! Pan’s life used to be very small. Work in her dad’s body shop, sneak out with her friend Tara to go dancing, and watch the skies for freighter ships. It didn’t even matter that Tara was a princess… until one day it very much did matter, and Pan had to say goodbye forever. Years later, when a charismatic pair of off-world gladiators show up on her doorstep, she finds that life might not be as small as she thought. On the run and off the galactic grid, Pan discovers the astonishing secrets of her neo-medieval world… and the intoxicating possibility of burning it all down. 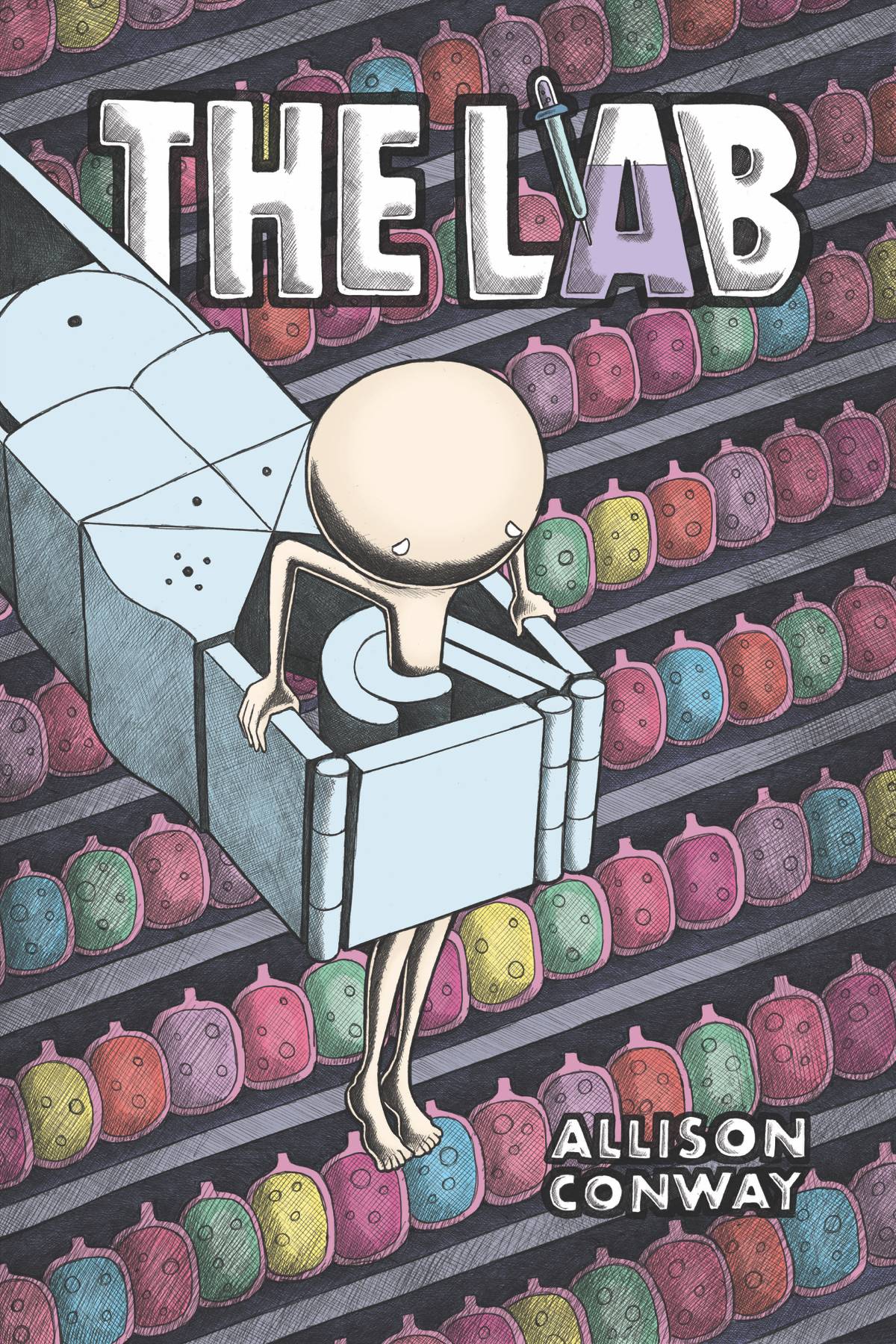 The Lab is a wordless visual journey into the grim machinery of exploitation. Its nameless protagonist is held in solitary captivity, alternately poked, prodded, starved, drugged, and worse. Brief glimpses of other test subjects, undergoing their own ordeals, are few and far between. But is all this abuse and isolation purely arbitrary? Or is there a purpose?
Painstakingly and evocatively rendered, Allison Conway’s debut graphic novel explores the spectrum between lifeless gray and vivid color. It asks uncomfortable questions about the treatment we tolerate and the injustices underlying our modern world.

To mark the 80th anniversary of Batman, DC today unveiled plans for a global commemoration of the World’s Greatest Detective….