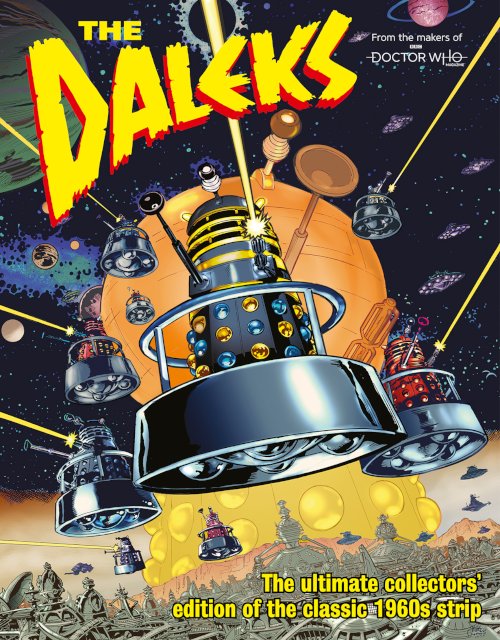 This winter, as the Daleks prepare to return on New Year’s Day to battle the thirteen Doctor and Captain Jack Harkness in BBC America’s Doctor Who holiday special and the Daleks are starring in an animated series on the official Doctor Who YouTube channel that ties into the multimedia event Time Lord Victorious, classic Dalek comic strips from the 1960s return to print, fully restored and with copious extras, in Panini’s Doctor Who Magazine Presents: The Daleks (DEC201598, $19.99).

Doctor Who Magazine Presents: The Daleks
(W/A) Various (CA) Mike Collins
The ultimate collectors’ edition of the classic 1960s strip. First published in the British comic TV Century 21 between 1965 to 1967, The Daleks was devised by Terry Nation and largely written by Doctor Who’s first story editor David Whitaker.
For this collectors’ edition, all 104 installments of The Daleks comic strip have been digitally restored, the vast majority from the original artwork.
The bookazine also includes new features about the writers, illustrators and publishers who created The Daleks, including a detailed interview with artist Ron Turner.

These comic strips, rarely seen by American Whovians, present a fascinating look at the Daleks, showing them at the height of their imperial power, subjugating worlds with their fleets of TransSolar Discs, ruled by an Emperor with an enormous golden dome who orders from the Dalek homeworld of Skaro the subjugation of countless worlds with the power of the Daleks’ feared transsolar discs. These stories are vintage space opera, epic and imaginative, that add depth to the Doctor Who universe by revealing the Daleks at their mightiest and most cunning when the Doctors are not around to thwart their evil machinations. Readers of The Daleks will find the inspirations for elements seen in the YouTube animated series, from the domed Emperor to the transsolar discs and the intergalactic empire.

Editor Marcus Hearn said of The Daleks bookazine: “This is the fulfilment of a long-held ambition. I loved this strip as a child and now, having seen the stunning restoration by DWM art editor Peri Godbold and her team, I admire it even more. You can’t really say The Daleks has been restored to its former glory, because I think it now looks better than it’s ever looked before.”

Here’s a first look at The Magicians #1, the premiere issue of an all-new original five-issue series based on the New York Times bestselling book series from creator Lev Grossman….

Entertainment One, the entertainment studio of Hasbro, and Paramount Animation will develop & produce an animated Transformers theatrical feature film under the direction of Academy Award-winner Josh Cooley….

Find out what makes U.S.Agent tick and check out never-before-seen art form the series in this new video interview!…

Boba Fett and the classic Stormtrooper are going through the carbonite chamber for these special edition action figures. Check them out inside!…