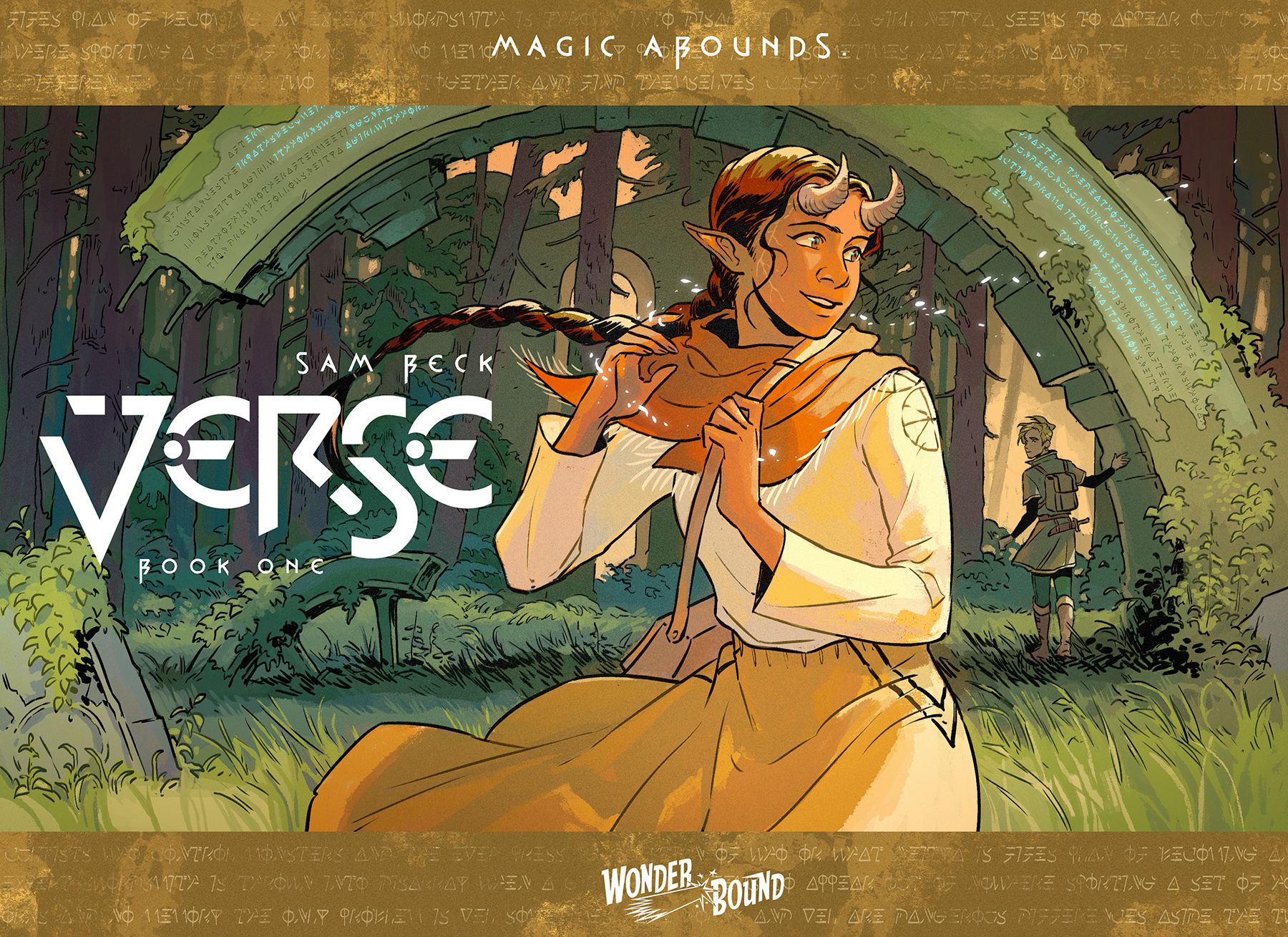 Wonderbound is thrilled to announce they will publish Verse, an inclusive young adult fantasy graphic novel series by star writer/artist Sam Beck. Verse will be released in the Fall of 2021.

Verse is the story of Fife, who lives in a world where magic is feared–only the evil monsters known as Vell are known to use it. But when Fife discovers a young girl with mysterious powers, everything he ever thought he knew is turned on its head. Forging a friendship that will change the course of their society, Fife and Neitya take their first steps on an epic adventure through an unforgettable world.

“The story of a shared journey is one that feels timeless,” said Sam Beck. “It isn’t the promise of adventure or the fantastical things you unearth that draw us back to them. It’s getting to see how each character grows and develops along it, testing the bonds they form over and over again. And even when paths diverge, as they often do, seeing how they manage to find a way back to each other.”

“I tenaciously sought these stories as a kid; in video games, in books, and in comics—my only wish, to immerse myself in that shared journey. Nothing is more delightful than being presented with a cast of colourful characters and slowly getting to learn what drives them to make each decision. To turn them over in your head and wonder what path led them there.”

“Verse is the story I wanted to read as a shy, bookish, thirteen-year-old. To be shown a wonderful and terrifying world and still get to see the moments of tenderness between characters amidst all of it.”

Sam Beck is an illustrator and cartoonist living in Toronto. She likes to explore themes of identity and relationships through the lens of fantasy. She has done work for Dark Horse, Vault Comics, BOOM! and 2000AD. You can follow Sam on Twitter @sambeckdraws

Wonderbound is the middle grade and young adult publishing imprint of Vault Comics. Every Wonderbound book is a ticket to a land of wonder, inviting you to leave behind the ordinary, and explore a world of magic, marvels, and mysteries. Whether you’re learning fantastical wrassling, going on zany quests to deliver packages (and stuff), solving the mysteries of a gothic mansion, or settling into a spooky new apartment, you’re always in for an adventure.

Marvel’s Spider-Ham is swinging through with a new solo comic series that features a Porker and Parker time-traveling team-up.
The post SPIDER-HAM Is Getting His Own Comic Series appeared first on Nerdist….

Baby Billie Mariana Morales finds out just what it means to have Spider-Man as a big brother in Rahzzah’s adorable Miles Morales: Spider-Man #18 cover! …

Marvels Snapshots showcases legendary tales told through the eyes of ordinary people! For April, Kurt Busiek has handpicked the creative teams to tackle April’s issues focusing on Captain America and the…

Check out the New Warriors #1 trailer for Luciano Vecchio’s designs along with Daniel Kibblesmith’s inspirations behind this one-of-a-kind team of young heroes!…